SVG-edit, a web based SVG editor

Last weekend I was looking for a nice in-browser SVG editor. I found some alternatives, but no one was close to my ideals. :-) Most feature complete was SVG editor by Chris Peto, but it has complicated interface based on CGUI and is also pretty heavy. Then I stumbled upon svg-edit by Narendra Sisodiya.

It was rather raw and lots of features were missing, but then I sat down, started hacking and after few hours I created quite a long list of changes. When I sent them to Narendra, he was so kind that he made me an administrator of the project, so I was able to push all my changes into SVN trunk and to continue the work there.

Today I finished all changes I wanted to fix before the relase, so I can present you the 2.0 release of SVG-edit! You can try for yourself. 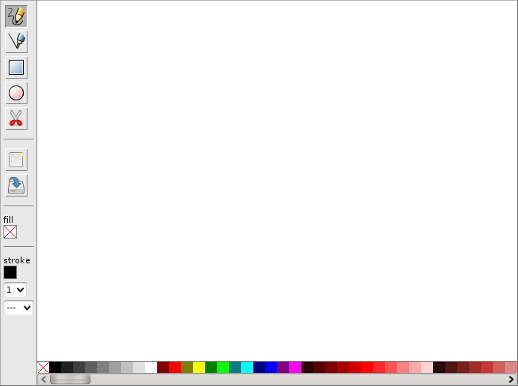 During the development I was testing it in Firefox and Opera and I’m sure there will be some problems in other browsers. If you hit any, do not hesitate and write me an e-mail or even better use the issue tracker on the project site.

Also there are some features that are still missing, but they are planned (like adding text, more complicated shapes or selecting, moving, scaling, rotating objects) and I hope they will be added in the near future.

Looking for claps? Instead, donate some bitcoins via the Lightning here: