Last weekend I attended FOSDEM 2010 and it was a blast! I’ve never seen such a high number of tracks on a conference. Kudos to the organization team!

During these two days I was sending a short messages via identica and twitter, because as @amedee said “the crew provided a fiber optic network, so people can compress their thoughts in char[140] blurbs”. :-) I still decided to write a short report, because not everything could fit into these blurbs and not everyone uses these microblogging services. So here we go!

The first keynote I attended was the “Evil on the Internet” by Richard Clayton. The Janson room totally crowded as can be seen on the photo below. I expect there were around 1200 people in the audience. Richard spoke about various tricks how to identify scammers and one of the interesting points was that you can use Google Street View to check scammers’ (often fake) addresses. 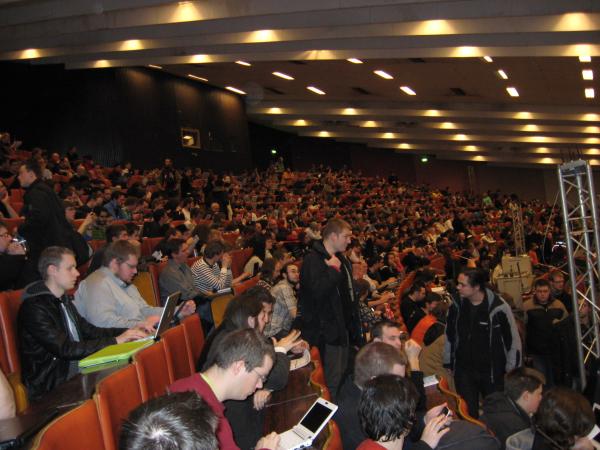 After the keynote I went to see KDE SC 4.4 demo by Jos Poortvliet. It turned out to be a good choice, because I finally learned why the “Rotate widget” feature is useful. :-) Imagine a multitouch-table with 8 people around, each working with his/hers own set of widgets. Pretty cool idea!

I was interested how Maemo and Fedora manage their communities, so I attended the respective talks in the Distributions track. Maemo uses karma to measure the activity of its community members. They have 6 masters who take care of their field related issues and 5 members of community council (see Maemo.org team page). Max Spevack of Fedora surprised me that he had no prepared slides, but he is a good speaker so the talk was still very good. He spoke about Fedora governance “mountain” which is: Individual, Regional, SIG, Project, Board, Project Leader. One good thing about SIGs is that they can miserably without bad impact on the distribution as a whole (but they tend to be wildly successful). In the end Max recommended us reading The Starfish and the Spider book.

Then I went to see the Ruby+Rails devroom. More than 70% of people had MacBooks there, but this could be expected. :-) Nicolas Jacobeus gave us 25 tips for Ruby and Rails development and Francois Stephany told us about how Ruby is still being inspired by Smalltalk even today and used pretty funny examples to demonstrate it: 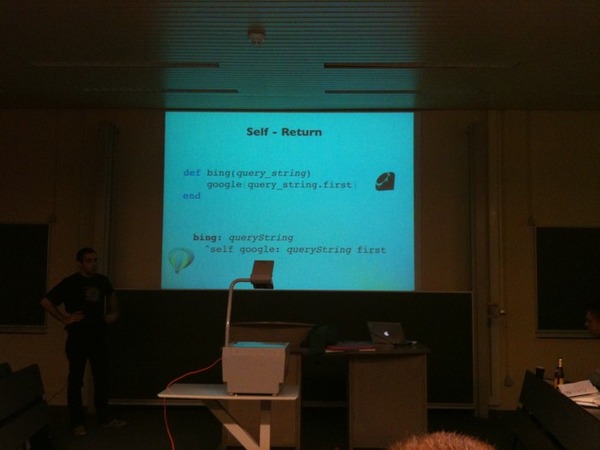 I wanted to see the last 2 XMPP talks, but their devroom was desperately full, so I went back to our stand to meet the rest of the openSUSE gang and have dinner with them.

Second day had even more visitors and most of the smaller rooms were full. I couldn’t get to Miguel’s talk about Mono Edge, so I went to see NixOS talk. They use very interesting package management and configuration storage. See bottom of this page for more info.

After that it was my turn to give a talk on RPM packaging collaboration. It went quite well although the battery in my microphone died, so the recording will be probably fubared. I got valuable feedback from Fedora and Mandriva folks, even from Jeff Johnson. Let’s see if it raises the level of discussions on rpm.org wiki, mailinglists and IRC.

I was finally able to make it into the Mono room where Miguel shortly presented the Pinta paint editor and Alp showed us Moonlight player which used fully-managed Theora codec to play the movie. These demos were followed by series of in-browser and desktop Moonlight demonstrations by Andrea Gaita.

Then I rushed to see Evan presenting his StatusNet project (you might know it under ther former name laconi.ca), but I was able to catch only Q&A at the end. Shortly after GregKH appeared on stage and gave very funny (as usual) guide how to contribute to Linux kernel. He also talked about the coding style and gave a perfect explanation why to care about it (of course, not only in kernel, but generally): If you have a coding style, code patterns will start to emerge and you are able to see the “metadata”. 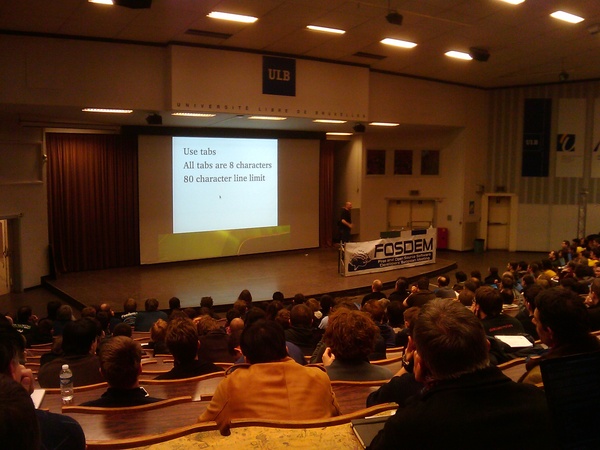 This was the last FOSDEM talk and all I had in front of me was a looooong travel home, but definitively worth it! :-)